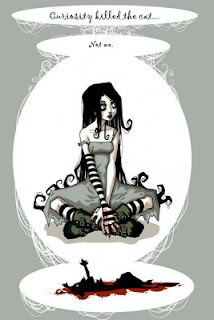 It is the middle of August and that means it's time for the third in a series of Creepy Samples Offerings. This excerpt is taken from the story entitled "Jessica," which is found in my first book, "Tales of Dark Romance and Horror.

We pick up where Jasmine, after leaving her friend's collectible's shop, arrives home with a creepy doll named Jessica. As Jasmine walked along the dreary streets of Sea Haven, she'd had the distinct feeling that someone or something had followed her along the way. Now that she's at home, that feeling has not dissipated.

"Outside, the stalker stands idly by the gate. Barely noticeable to the naked eye, the being pauses – held back by fear. It is not a fear of being seen by passers-by in their swift vehicles; more likely than not, they would have to be aware of this visitor’s presence to see it – to see him! Oh no, it’s the human – the woman that lives in this house – who now has the body of his beloved in her possession; she’s the one to be concerned about.

"I know she’s aware of my presence, he thinks to himself. She walks between the realms; she has power. Still, I must go in there. I must be re-united before it’s too late. I have to be brave. I’ll wait until she sleeps – they all sleep. Then I will see my beloved.
***

"Jasmine returns to her living room, puts the soup, sandwich, and a cup of herbal tea on top of the coffee table, then moves over to the fireplace where a grate, already stacked with paper, kindling and logs, awaits the flick of her lighter. Still convinced that an unknown presence lurks nearby, she watches as the fire begins to take on a life of its own, then steps outside the front door and stands on the small deck silently – not looking for anything in particular, just feeling – sensing. For just the briefest moment she sees a dark distortion by the gate - perceives might be a better word.

"'Show yourself,' she says in a conversational tone, 'show yourself to me so that I can know what you want.'

'There is nothing else to be seen or heard except for the fog horn blowing in the distance and the waves as they continue to crash upon the nearby shore. After standing in silence for a few more moments with nothing manifesting, the intuitive woman returns to the shelter of her small but comfortable home.

"Once more inside the living room, she lights her wall candles and a stick of incense, chooses a CD to play, and then turns off the lights. “This ought to make you feel right at home Jessica,” she says quietly while casting a glance at the figurine, 'I bet you can handle this just fine; and maybe – just maybe, we’ll get to the bottom of what’s happening here.'

"As she settles onto the sofa with her snack, the sound of music fills the air. It is slow and melancholy; yet, dark and beautiful – funeral doom, encompassing the small abode in an almost otherworldly atmosphere. Within a few minutes of finishing her meal, she reclines against the back of the sofa with feet on the coffee table. The slow but hypnotic beat of the music mixing with the flickering light and fragrance of incense brings her to the brink of trance – only to the brink however, for she knows that it is necessary to stay alert – at least until she confronts that which remains nearby.

"After a moderate amount of time transpires, there is a slight movement of the door, but it is enough to garner her attention. Gazing toward the entrance way she sees a short but translucently dark figure looking back at her. Sensing the being’s caution – its fear of her, Jasmine is able to release any apprehension she may have had. Without moving, she watches as the unearthly visitor inches forward and away from the door."

Well, there you have it; the second Creepy Sample's Offering for the month of August! Stick around, because the next offering is just over two weeks away. Until then, keep it creepy! 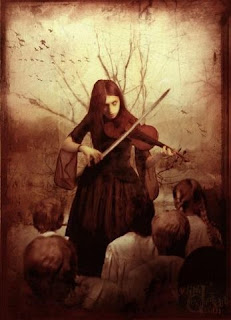 Once again, it's time for another Spooky Samples Offering. This time, the excerpt comes from a story entitled, "The Collective Evil," which is the second of my "Raven" series.
In this tale we once again glimpse into the Land of the Dead, where an unspeakable evil wreaks havoc with the inhabitants thereof.
Let's join a band of Fae horsemen as they plan their defenses against the evil that threatens their existence:

Somewhere out in the darkness of the night, Lord Sorin signals the other horsemen to stop, even as he attempts to quell his own mount’s nervousness; this, after hearing what appears to be an explosion - one that is quickly followed by a hideously-low growl – an almost sadistic, yet sickeningly vile sound. “What in the name of the Goddess was that?” he asks aloud – his question not aimed at anyone in particular.

One of the other riders, a woman, approaches and stops at his side. She removes the hood that has been restricting her hair, and giving her head a shake, frees her long curly locks. Her hair is so intensely red that its color can be discerned even on a night as gloomy as this. “During all of the time that I have lived in the land of Mircea, I’ve never heard a sound as horrific as that.”

“Neither have I Alexandreina. And I cannot believe that this is not some hideous manifestation that has come to us by way of the humans.”

“Perhaps, but we cannot forget that the human world likely contains as much diversity of thought and action as does our own. Earlier tonight, you spoke with the human witch that took residence here after her departure from the Earth plane. What are her plans?”

“She intends to consult with her familiar, the one named Sebastian. I must admit that he displays magnificent powers of perception. I would…”

“Then I must attempt to contact her clairvoyantly, she interrupts, “I doubt that whatever is afoot here can be defeated by bow, arrow and sword alone. I suggest that we hold up here for awhile and that you and the others allow me the solitude needed to make contact.”

“I will make it so Alexandreina.”

Their conversation concluded, she leaves his side and rides off in search for a place of solitude. As the sound of her horse’s hoofs retreats toward a nearby rock formation, something new becomes audible. It is the sound of a traumatized people –screaming – fleeing from some unspeakable horror that lurks somewhere in the darkness.

There you have it. I hope you enjoyed this week's sample and will come back here again around August 15 for the next Spooky Samples Offering.  Until then, keep it creepy!