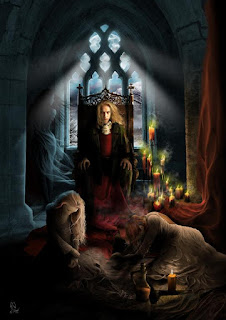 Halloween is behind us, but fear not; it's time once again for another Creepy Samples Offering.

Today's sample comes from a piece included in my first book entitled, "Tales of Dark Romance and Horror." The title of the story is "The Coven."

This time, we return once again to North Carolina's Outer Banks where, after the Appearance of a charming stranger at Angela's Collectibles, Jasmine and Angela drive up to Nags Head for a goth event held by a coven of human vampires at a venue called The Sea Hag. As the two make their acquaintance with their hosts, a desperate figure walks a lonely neighborhood before arriving at the venue.

Several blocks away, a dark and lonely figure walked along the quiet street; his solitude broken only by the occasional passing vehicle. Weak, and with an intense desire that had to be quenched, a man staggered toward his destination. I must not let them see me like this, he thought to himself. I simply must find some form of sustenance before I make my appearance.
Triggered by the sound of the man’s staggering footsteps, the voice of a barking dog suddenly penetrated the silence of the night.
“Oh yes! Perhaps all is not lost after all,” he mumbled to himself.
The dark figure turned down the next available side street and focused upon his urgent new mission. Although physically weak, he was still in full control of his mental abilities; and as he drew closer to the noisy animal, he concentrated on a mental command. Relax! There is nothing to fear in death. It is your destiny!

The dog ceased making its agitated sounds before the source of its agitation arrived at the back gate. Upon eyeing the figure standing before it, the dog let out a quiet whimper—the sound of surrender.

“Now, now, it’s okay,” the mysterious person whispered while petting the dog. “It’s okay.”
Slowly—ever so slowly he moved closer—locking his victim into an affectionate but deadly embrace. With a deep breath the being opened his mouth; and with fangs that surpassed those of his prey in size, tore open the animal’s jugular. Even as he feasted upon the canine’s warm sanguine liquid, he could feel his own strength returning—filling his veins with a renewed energy—and strength! Within moments the dog laid dead upon the ground, completely drained of its life blood.

“Ah! Not perfect perhaps, but certainly better,” he said to himself with a new vigor. This will hold me and will make me appear far less suspicious as I pursue my ultimate goal for the evening.”
Partially sated, the somewhat invigorated predator strode back toward the main street.

After our Halloween celebrations, I hope that you the reader can handle a bit more vampire material, because that's what this offering is about.

Until next time then, thanks for reading and liking this page.