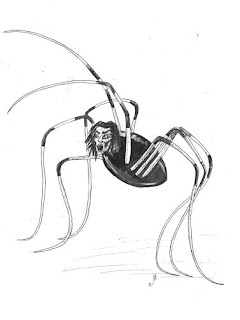 Hello everyone! We now find ourselves at the beginning of December, and that can only mean one thing. Yes indeed, it's time for another Creepy Samples Offering.

This time around, I'm going to feature one of my personal favorites, which is found in my first book, Tales of Dark Romance and Horror. This particular story, Night of the Harvestmen, was featured in a Horror Addicts dot Net podcast back in 2015, and it won the Horror Addict's Best in Blood Award for Season 9. It is featured in the Episode 99 podcast on the above-mentioned website.

We'll pick the story up the morning after our protagonist had returned home from a visit to the city, where on the night before, he'd had a brief encounter with a lady that rocked his world. Also on that same evening, he had discovered a lone harvestman occupying his bathroom.

The following morning, I put on the coffee and made my way to the shower. I stepped into the stall and found myself taken aback by the sight of two more harvestmen standing side by side as they clung to the inside of the curtain. “Damn it! I thought I told you to stay out,” I scolded. I reached for one of them but the movement of the shower curtain caused the other to fall to the floor. “Shit!” I exclaimed as the critter scurried past my feet and out of sight. Without hesitation, I took my captive to the door and threw it into the adjoining greenery. “Now stay out,” I warned, slamming the door shut. I returned to the shower in a somewhat unnerved state as I considered that the second harvestman might still be lurking nearby.


During the days that followed their numbers increased exponentially. I would find them lurking on the shelves, scurrying along the sink and staring at me—yes, staring from the darker recesses of the restroom—each with its front legs wagging back and forth—scanning—monitoring my every movement. Perhaps they’ve been driven inside in search for water by the summer’s drought, I reasoned.


They moved under the cover of darkness and at times, I awoke to find one or two hovering on the ceiling above my bed or viewing me from behind one of the ghostly marionettes that decorate my wall. The creatures’ persistence continued to unnerve me and I responded by devising a new method for removing them, a wide-mouthed bottle with which I would scoop them up en masse before releasing them into the wild, far enough away that they would never bother me again. Gentle soul that I am, it hadn’t yet crossed my mind to kill them—and never with chemicals, to which I am overly sensitive.


A couple of days later I noticed my prey running into the narrow space between the shower stall and the adjacent wall—a gap too small for me to fit my bottle into—a place too small and dark to capture them. “Aha! So that’s your place of safety, is it? Well, we’ll see about that!”


Truth be told, the idea of looking into that dark corner of the cottage filled me with dread. A horrible thought took hold—one so revolting I attempted to expel it from my mind at once. Still, it forced itself to the forefront of my consciousness and filled me with loathing. Perhaps they’re breeding in there, sensually rubbing their long, skinny legs and bodies together in some grotesque sexual dance! The horrific possibility of it all kept me from peering behind the stall for a day or two. I couldn’t muster enough fortitude to confront the revolting spectacle I might find in that obscure place.


Before long, the need to gather intelligence on my new adversaries superseded my revulsion over what I might find. On the morning of the second day I stealthily approached the shower stall with flashlight in hand. I took a deep breath and shined the first rays of artificial light into the darkness.


“Oh shit!” I exclaimed as I gazed at the sight before me. The monsters had gathered in hordes—standing side by side—dozens strong, lining the wall. Their front legs swung back and forth like tentacles seeking to draw some unsuspecting prey into the hideous creatures’ bosoms, all the while strangling the life out of it.


At first, I retreated in utter disgust. Then, I cast the luminous rays into the dark corner once again. This time, I grabbed one of the little monsters by the hind legs and brought it under a magnifying glass for closer inspection. What I saw only served to increase my anxiety. I saw a creature with bulbous eyes and two projections from its mouth resembling a monstrous beak, one ideal for tearing and slashing!


I tossed the spider-like being outside before grabbing a piece of newspaper and making my way back to the shower. I folded the newspaper over my right hand and reached behind the stall and applied pressure, crushing the life out of the invaders. Bodies fell to the dank netherworld below while others from among the ranks scattered in all directions. Again and again I struck at them, grinding them into the moist wall, leaving behind any compassion I once felt for them.


My struggle against the eight-legged horde continued unabated over the next several days as they began moving about in herd-like formations, climbing on windows and screens, darkening the walls with their numerous bodies—advancing, always advancing until they had taken over my cupboards and closets. At night they sometimes ran across my body as I attempted sleep—mocking me and my inability to vanquish them. In turn, I fought them with whatever tools I had at my disposal until, their numbers greatly diminished by my continued efforts, the survivors lost interest in continuing the fighting. Defeated, the beasts evacuated the premises. They’re gone. Victory is mine!

Well, I hope you enjoyed this week's entry. The next Creepy Samples Offering will feature a Christmas-related tale. I hope you'll be here for that one. So until next time then, keep it creepy.

Posted by Nightwind at 4:02 PM