Creepy Samples Offering: A Fall From Grace: The First Hunt 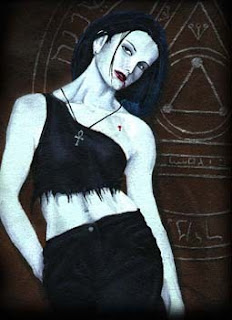 Greetings to you all, Dear Readers. It's May 15 and that means it's time for another Creepy Samples Offering. This one is a bit special as it's the next to last sample offering for awhile. It's hard to believe, but I've been doing these twice per month since around the beginning of July of last year. So yes, we're getting near the end--for now!
In any event, in today's offering we return to the adventures of the Vampire Lady Andrea and Jessie Tucker. "A Fall From Grace: The First Hunt" is found in my second publication entitled, "The Darkness Beyond the Misty Veil: More Tales of the Macabre.
We pick up the story in the darkness of Louisiana's Kisatchie Bayou, where Lady Andrea has been unnerving, pursuing, and then mesmerizing Eddie Canton, Jessie's assailant, with seductive images.


“Ugh!” He shouted, confused by the sudden cut off from the titillating experience. “Wh....what happened? Why don't ya do what ya want to and get it over with?”
“Because I got what I wanted,” she responded. “You just damned your god and everything you've ever stood for. I have now prepared you to enter the place that lies beyond the gates of Hell.”
Canton realized the truthfulness of what she spoke. He had indeed done as she'd said.
“You tricked me with all that sexy stuff,” he informed her. “You tricked me!”
Lady Andrea laughed heartily before responding. “Do you really believe that I'd want to provide you with pleasure after you smashed my Jessie's head with a rock, killing him? No, there is another who will have the pleasure of draining you of your life's essence, and I will lead you to him.”
She began walking in his direction; the self-confidant smile and hungry expression never disappearing from her face. The frightened man dropped his fishing tackle and moved quickly in the direction of the bayou, screaming as he ran. “Help! Somebody help me!”
Eddie Canton's gait outpaced his limited field of vision. More than once he blindly stumbled over the underbrush, only to quickly right himself and continue on toward the bayou.
Moving through the darkness, Eddie could hear voices calling to him from the direction of the camp. “Over here,” he shouted with a shortness of breath. “Over here!”
The thick woods abruptly opened up before him, revealing the same location where he had spent the last couple of hours fishing. As Eddie rushed toward the water's edge, a dark figure, as if from out of nowhere, took position directly in front of him, blocking his path. The dim light of the lantern shone upon the figure's pale features, and the panic-stricken man gasped in sheer horror.
“Je....Jessie? Is that you?”
The strange figure inched closer to him as he spoke. It's Jess of the House of the Crescent Moon now, Eddie. Are you surprised to see me?”
Canton attempted moving backward, but his escape was blocked by the woman.
“How can this be?” Eddie asked. “You're ….”
“Dead?” Jess responded. “Indeed I am; and yet, I'm standing before you. Pray to your god,” Jess continued, “for you too are about to join the ranks of the deceased.”

There you have it! We'll see you around the beginning of next month for the final offering. Until then, keep it spooky!
Photo source: Gothic Pictures Gallery.
Posted by Nightwind at 11:42 AM