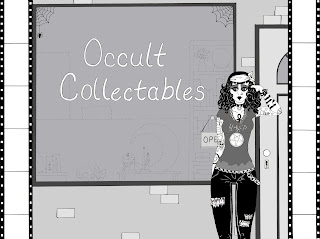 Hello, Dear Reader We have arrived at the middle of October. The spooky season is upon us. What better time than this to offer you another Creepy Samples Offering.

This time I am including an excerpt from a story entitled Theda. The tale concerns a young man named Ross and his obsession with the silent-film star Theda Bara, who was at the height of her acting career during the 1910s.

We pickup the story after Ross has a vivid dream in which he finds himself in an early twentieth-century setting, where he is confronted by the object of his obsession. The question is, was it a dream or was it something else?

Theda expresses her desire to come across from her realm in order to join him in his. “You must invoke me,” she tells him in order to bring her across the divide. With his task set out before him, and with no idea how to abide by Theda's instructions, he goes to an occult shop the following day, looking for answers.

'The next day went by agonizingly slow as Ross, eager to put his plan into effect, first had to contend with some classes at school before putting in a few hours with his part-time job at the university bookstore. He finished with his commitments early in the evening, and headed directly for the local occult shop.

'The sweet fragrance of incense and the sound of slow heavy metal music caught his attention as he entered the occult shop. The young man's discomfort was visible as he searched for the item he had in mind; and, in spite of his best attempts to appear nonchalant as he browsed through the many unusual offerings, little time elapsed before the clerk approached to assist him.

' “Can I help you find something?” she inquired.

'He turned his gaze toward her, and was taken by what he saw. She was a very attractive young woman with pitch black hair, tattoos, and a nose and lip piercing. She wore a sleeveless t-shirt that said Slayer—Reign in Blood. The store clerk was unlike any woman he had ever encountered; and, although she offered him a warm smile, he was overwhelmed by her beauty and demeanor. There was something vaguely familiar about her, but he was unable to put his finger on it. Naturally, he considered the beautiful woman standing before him completely out of his league.

' “I uh...” he stuttered, “I'm looking for a Ouija board. A good one—a real one if you have any.” He couldn't believe that he got the words out.

'She gave him another warm smile. “It seems to me that you're a man with big plans. Come with me. We have a nice selection.”

'He followed her to another aisle, where she pointed at the items before addressing him once again.

' “These are all authentic. As you can see, they vary in appearance but will all do the trick. Is there anything else I can help you with?”

'She offered him another smile before leaving him alone to make his selection. He looked over the merchandise carefully. This was a big step, and he didn't want to make any mistakes. Finally, he chose the board that he found most attractive, and brought it to the check out counter.

' “Have you ever used one of these before?” the clerk inquired as she placed the board in a paper bag.

' “Then you should be careful,” she explained. “These can open up the passageways between this world and the spirit world. Some people live to regret misusing these after seeing what they've brought into their lives. I recommend trying it with someone experienced first.”

Well, there you have it. Theda, incidentally, is contained within the pages of my latest book entitled, A Day of Reckoning and Other Frightful Tales.

Until next time then, enjoy this spooky month of October!

Posted by Nightwind at 2:44 PM