Creepy Samples Offering: Rosalie: Return of the Righteous One 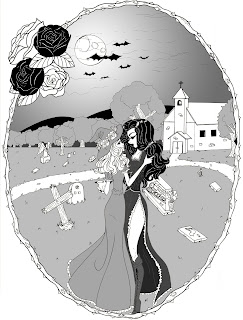 It has been quite a while since I have done a Creepy Samples Offering; and, to be honest, I had fully planned on having it done before this point in time. Still, as it often happens, life can get in the way. That's my excuse, and I'll stick with it.

This is the last of the offerings from A Day of Reckoning and Other Frightful Tales. There are more tales featured inside of the book than those I have featured here, but the others are rather short--so short, that I feel it's better to not take excerpts from them, and to let the reader indulge him/herself in the full story.

This final offering is taken from the story, Rosalie: Return of the Righteous one. This particular tale is the sequel to Rosalie, which appears in my first book, Tales of Dark Romance and Horror. It also crosses into the story-line of The Arrival of Narkissa Laveau, which appears in my second book, The Darkness Beyond the Misty Veil: More Tales of the Macabre. So, please allow me to delve into the meat of ;this year's offering.

A young boy, who with his family lives on Haunted Mountain near the small community of Fox Grove, is found brutally murdered after being sent to perform a simple task for his mother. Even before the gruesome news comes to the Johnson Family, which also lives on Haunted Mountain, Rosalie, a young but powerful witch, expresses her intuition that some type of evil is lurking in and around the community. After learning of the boy's fate, she goes to her secret spot in the forest where she communicates with her long-deceased great-grand Mémére. After receiving her great-grandmother's guidance she decides to go to the local cemetery to see what she can learn. So, we pick up the story at the graveyard.

A vehicle pulled to the side of the highway two days later. It stopped just a short distance from, and just out of sight of the Fox Grove Cemetery. The driver turned toward his companion, handing her a flashlight before he spoke.

“I don't have a good feeling about this, Rosa. I wish you would just forget this whole idea. Whatever is going on, it doesn't directly affect us.”

“My Mémére seems to think that it will,” she responded. “You know that I had a feeling something was wrong even before we heard about the Buchanan boy. If we're in danger, or unknown forces are going to affect us, I want to know what to expect.” Her demeanor softened as she stroked his face lovingly. “Don't worry, Honey, I'll be fine.”

“Well, I'll just be at the turn around up ahead, waiting to hear from you,” Robert told her. “Call if you get into any trouble. I can get back here within a minute or two, if need be.”

She pulled him close, kissing him deeply before breaking the contact. “Will do,” she responded before exiting the vehicle. “See you soon—and don't worry!”

Rosalie waved Robert on before crossing the road. She decided not to be covert upon entering as that might cause suspicion, and instead, walked through the main entrance.

She nonchalantly passed by the grave markers, reading the various epitaphs in the deepening twilight as she made her way toward her great grandfather's final resting place. The young woman stopped upon reaching the familiar stone, and gazed down at it sadly before speaking in a voice barely more than a whisper. “You filled Mémére 's heart with joy, Grand-père. I wish I could have known you.”

Her reflections were interrupted by the sound of rustling leaves and snapping branches in the nearby woods—footsteps! Moving into a state of high alert, she shined her light in the direction of the sound, but saw nothing. The movement stopped with the flashlight's illumination.

It's probably just some forest animal, she thought to herself in an attempt at reassurance. Still, her instincts told her differently, and she had long ago learned to trust her intuitions.

Rosalie turned off the flashlight, but remained in place, looking in all directions, listening, dreading the possibility that she might soon confront some unspeakable evil.

A near silence engulfed the burial ground. There was only the sound of a gentle breeze as it swept through the treetops. The quietude was short lived, however, as the sound of footsteps from beyond the perimeter of the graveyard began anew. This time, the rustling upon the ground was accompanied by low-pitched, blood-curdling moans. They were unlike anything the young woman had ever heard before. They were unnatural, ungodly, and seemed as if they must have originated from within the very bowels of Hell. She again cast her light in the direction from which the sounds emanated, but to no avail. Whatever horror lurked nearby remained obscured, even as it shifted around menacingly.

Without warning, a church bell rang out, penetrating the relative silence of the night. It tolled from atop the steeple of the abandoned church, which adjoined the opposite end of the graveyard.

Rosalie, although startled, reacted by casting her light toward first the bell tower, then the main part of the structure and its immediate surroundings. She saw no sign of a human presence, however.

The bell rang out once again. This time, it continued to chime—solemnly, slowly; its mournful resonance echoing across the mountainous landscape. Time seemed to stand still as the bell, accompanied by the ghastly moans, still coming from the nearby woods, blended to form a dreadful cacophony, which betrayed the presence of something unspeakably sinister.

Just as quickly as the ringing had begun, it ceased, as did the grotesque vocalizations from the forest. Rosalie, completely unnerved by the experience, pulled her cell phone from her pocket and made the call.

“Be right there,” came the response.

She had just begun to make a hasty retreat toward the highway when a louder snapping of branches just to her right sounded a new alarm. Halting her retreat, Rosalie froze in place as she again shined her light in the direction of the sound, revealing a man-like figure emerging from the woods. She gasped as the being stood in place, staring at her menacingly. It had the shape and size of a man, but its skin and remaining teeth were rotted. One of its eyes was hollowed out. Its clothing was torn and ragged, but what startled her the most was the Stetson hat that sat upon its head.

Rosalie backed away in disbelief and horror. The creature growled in an act of recognition--mutual recognition!

She screamed, running for the highway as fast as her feet could carry her, reaching the two-lane just as an illumination in the distance signaled the approach of Robert's vehicle. It was when she got by the road and looked back toward the cemetery that she saw, in the growing illumination of the headlights, a darkly dressed woman, standing on the dirt road between the church and the highway. The woman was gazing in her direction; her eyes shining an unnatural green as the vehicle slowed. Her stare was compelling, even mesmerizing. Rosalie stood in place, staring back into her paranormal orbs.

Robert's voice broke the spell as he opened the passenger's door. “Come on, Rosa, get in!”

His partner broke eye contact with the woman and quickly got into the car. “Robert, look! Look!”

“Over there, on the road alongside the cemetery; that woman!”

“I don't see anything,” he responded.

Like an apparition, the green-eyed one had already vanished from view.

Robert hit the gas pedal, and the vehicle sped back toward town--and home!

Rosalie didn't look at the road ahead. She simply sat, staring downward; one hand supportmg her head.

“What the hell happened back there, Rosa?”

At first she didn't respond, and only continued covering her face.

“Come on, sweetheart, talk to me. What upset you?”

The shaken young woman slowly lifted her head, turning her attention toward him.

“Who?” Robert pressed with an air of impatience in his voice. “Who bothered you?”

“It was Crawford,” she continued. “I saw the Reverend Ronnie Crawford back there.”

“I'm tellin' ya,” she countered with annoyance, “it was him. But he's different. He's a monster now, a total monster.”

“Well, he always was a monster if you ask me.”

“Not that way,” she informed him. “I mean physically. He only has one eye, his teeth are rotted. So is his skin. He looks like something from out of a horror film.”

Robert was having a hard time wrapping his mind around what she was telling him, but he knew better than to question or challenge her; at least, not now.

“And that woman,” Rosalie continued. “There was something sinister about her. While I was outside the car she kept staring at me with her green eyes. I felt like she was trying to hypnotize me.”

“People can only be hypnotized if they want to be,” he interjected. “At least, that's what they say.”

“This was different. There's something about her. She's kind of magnetic. I could feel it, but she's scary as hell.”

“I've heard stories about a strange woman being around town,” Robert explained. “Thing is, nobody seems to know anything about her. She doesn't seem to live anywhere, but folks keep seeing her.”

“Yes, I've heard the stories too. Well, she's as real as I am--and so is Crawford. Somehow, she's got something to do with him.” Rosalie added, “I know it.”

The vehicle turned off the main road after passing through town. Not another word was spoken as they traversed through the dark countryside and climbed the steep terrain toward the top of Haunted Mountain, and home.

Well, that's it for this, my latest book. I hope you have enjoyed reading these creepy offerings, or even better, the full stories in either the printed book or the ebook version. So, until next time then, keep it spooky!

Posted by Nightwind at 2:35 PM