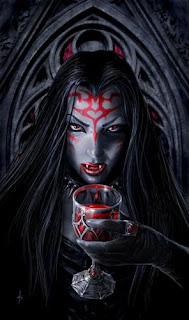 After a bit of an absence at the beginning of this month due to computer problems, I'm back with the next Creepy Samples Offering for mid-February. Today's entry, The Arrival of Narkissa Laveau, comes from the pages of my second publication, The Darkness Beyond the Misty Veil: More Tales of the Macabre. Before we actually delve into the actual story, a bit of background is in order.

A soon-to-graduate university student named William gets on Facebook one day to discover a new friend request. As he investigates its source, he discovers that it originated from a dark but beautiful woman, who plays the part of a vampire for internet productions. He accepts her request, and over time, can't get her out of his mind. When summer arrives, he discovers upon her invitation for a visit, that she lives only a few hours away in a small Ozark town called Fox Grove. He is to meet her in the local cemetery after dark. Although he believes that she is carrying her acting role a bit too far, he agrees to the meeting. We pick up the story as he awaits Narkissa's arrival at the cemetery.

The late afternoon heat had tempered somewhat by the time William walked into the cemetery. Evening had arrived. With its presence came the loud buzzing of cicadas emanating from the treetops and the cawing of crows, warning their brethren of his arrival. He gazed around the graveyard, hoping that Narkissa might have arrived ahead of him, but there was no sign of her.
She did tell me to meet her after dark, he reasoned. It's early yet. So, I might as well find a way to amuse myself until she arrives. He decided to explore the cemetery, and to see what he could learn about the earlier residents of Fox Grove.
He took note of a boarded up old church with its steeple and bell tower situated on one side of the cemetery. As he walked in the midst of the deceased, a feeling of sadness overtook him. The epitaphs carved into the stone markers told the tales of those who had come before. These had once lived as he lives. Yet, they are long departed; their memory nearly extinguished. Some had left this world at tender young ages. Others had died of accidents and disease. Yet, others had lived to ripe old ages. He didn't particularly care for graveyards. The burial ground upon which he stood reminded him of his own mortality; that one day he too would join their ranks and become nothing more than a fading memory.
The buzzing of the cicadas eventually gave way to an almost eerie stillness as day morphed into twilight. Fireflies arose from the graveyard's grassy bottom, beginning a nightly spectacle that would soon cast a dim, flickering illumination upon the tombstones. Bats emerged from the church steeple, beginning their erratic flight far above the resting places of the dead.
Alone and unaccustomed to the quiet darkness falling over the landscape, a sense of unease—even dread, began to swell up from somewhere deep within his soul. He walked nervously toward Narkissa's altar tomb and sat down upon it, waiting in silence as the darkness deepened.
Without warning, the sound of rustling vegetation and the snapping of fallen branches coming from the nearby woods broke the silence. Something of considerable size was moving around just beyond his limited field of vision. He shuddered as he contemplated the possibilities. William, although unaccustomed to the country, understood that black bear and even worse, wild hogs inhabited the Ozark region. He sat in silence, making not the slightest move out of fear that it would attract whatever predator might be lurking in the shadows nearby.
The last vestiges of twilight had given way to night by the time the disturbing sounds moved off into the distance. He breathed a silent sigh of relief as he gazed up at a quarter moon rising above the tree line to the east, shedding a dim, eerie light upon the grave markers and monuments, which in turn cast long but barely distinguishable shadows across the grassy floor.
I can't take any more of this, he decided. This is too creepy, and I'm not going to sit here for another minute waiting for some ungodly creature to attack me. I've been played for a fool and I'm getting out of here right now.
He stood up, turned toward the highway, and began walking toward his vehicle. He had only taken a few steps when something took hold of his shoulder. Sheer terror gripped at him as he spun around in an attempt to break it's grasp. “Augh!”
“Why William, what's wrong?”
His heart beat so furiously he thought it might jump out of his chest. Although completely unnerved and somewhat embarrassed, he now stood face to face with the beautiful Narkissa Laveau.
***
“I....Uh....” He was speechless, embarrassed, and unable to do anything more than stand before her sheepishly.
She chuckled at his discomfort before addressing him. “You are William, aren't you?”
“Uh yeah, I am.”
“Did I startle you?”
Seeing a way out of an embarrassing situation, he quickly collected his thoughts. “Yeah, I guess you did. I didn't see you coming and all of a sudden, there you were.”
“We vampires are hunters and creatures of the night,” she responded. “How could we stalk our prey if we announced our presence beforehand?”
She stared at him intently in the dim moonlight, her eyes reflecting the luminescence with a greenish hue. Narkissa's beauty ensnared him; yet, her facial expression betrayed any attempt on her part to hide her hunger—a hunger he could not define. Was it sexual? Or was it something else?
“So, is that what I am,” he asked flirtatiously, “your prey?”
“Isn't that why you came here? Didn't you imply that you'd like to be my victim?”
Although he was already under her spell, feelings of unease arose from within him once again. She's sure taking this vampire thing seriously, he admitted to himself. I sure hope she's not detached from reality. Wouldn't that be just my luck?
“Would you like to see my lair?” She asked. “You know, the one I've highlighted in some of my photos? After all, I'd like to put you at ease and make you as comfortable as possible.”
“Sure, lead the way.”
She took his hand and led him across the graveyard toward the abandoned church. Her hand was cold to the touch, but he hardly noticed, so intoxicated was he by her contact.

There you have it. I hope you enjoyed this month's offering and until next time, keep it creepy!

Photo source: Gothic Pictures Gallery
Posted by Nightwind at 10:19 AM