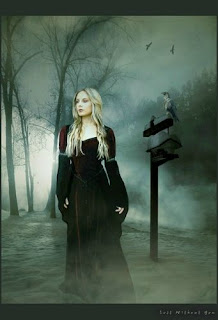 Hello, Dear Readers, and welcome to the March 1 Creepy Samples Offering! I hope you got to check in on last month's Vampire's Day Soiree. If you didn't, you still have the opportunity. Just scroll down to the previous post and you should still be able to see what the fun was all about. Time continues to roll along however, and so must I.

Today's story, Rosalie, is taken from my first book entitled Tales of Dark Romance and Horror. Rosalie is a novella that takes us to an America that has changed. Extremist politicians have gained control of the federal government and imposed a religious theocracy upon the citizenry. Robert, an artist and craftsman, decides to temporarily leave his home in town to hide out with survivalist friends who live close to the Fox Grove community on a hill called Haunted Mountain. The friend's daughter, Rosalie, is a young, seductive, but powerful witch who is in love with Robert. He in turn, is forced to resist her charms.


We pick up the story where Rosalie ventures into the forest to summon her deceased Great Grandma Boudreaux. Little does she know that she is being watched by two parishioners belonging to the church led by the Reverend Ronnie, Crawford; a zealot intent upon ridding the area of those he considers sinful.


Within an hour the twilight had descended upon the Ozark

landscape; and as the heated buzz of the cicadas yielded to the ever-

growing nighttime chorus of the katydids, Rosalie, with a sturdy

tote bag thrown over her shoulder, stepped back onto the pathway

which led to the spot she had earlier prepared. Walking through the

deepening darkness, she could see the rising lunar orb as it flashed

momentarily through the spaces between the trees.


Upon reaching her destination, the young woman quickly set about

the task of lighting a fire. When the new campfire grew to ahealthy

blaze, she opened her bag and took out its contents; her Book of

Shadows, a wand wrapped in black cloth, and a half gallon jar of

water with which to later extinguish the fire’s remnants. After

carefully removing the wand from its protective covering, Rosalie

gazed at the magical tool she had only recently fashioned. It was

about ten inches long and constructed from a fallen branch

belonging to the very oak that stood in the center of the clearing. A

a series of red threads. Attached to the handle was a wooden cat’s

head with each eye made of garnet. Both the cat’s head and the

wand itself had been stained an ebony hue.

With wand in hand, Rosalie moved next to the tree, facing toward

the rising moon in the east. For a few moments she stood with eyes

herself to the Earth below her feet and to the forest. Then, gazing


“Oh dark Goddess of the forest, mistress of the night,

I create and bless this circle in your name.

I invite you to this sacred space,

And ask that you open the portal between the worlds,

And allow the passage of my grandma—my “Mémére to this


Moving toward the outer reaches of the oak’s lower branches, she pointed the wand, now in her right hand, toward the ground just beyond her reach as she began walking around the tree in a clockwise motion.

“Be thou cast, circle,

As I walk along your edge.

Keep me away from harm,

And protect me as I now walk between the worlds.”


She walked around the tree three times; with each revolution repeating her words. After returning to the circle’s easternmost point for the final time she stopped; and facing the rising moon said, “The circle is cast. So mote it be.” Then, she quietly took a place on the log by the fire pit and gazed out into the darkness.


“Are you seein’ the same thing that I’m seein’ Danny? The preacher’s right about witches…”
“Shh!” The other man quickly responded. Then, in a whisper, he continued empathically. “Keep your voice down! She’ll hear us!”
The two men, having spotted Rosalie making her preparations earlier in the evening, had decided to move in closer in order keep watch on the small opening in the forest and any activities that might occur there. Now, hiding behind some bushes only 100 feet or so from the clearing, they could easily see everything the young woman was doing.

“Mémére,” Rosalie called out. “Can you hear me Mémére? Please come! I need your advice. Please come and speak with me.”


After making her appeal, the young supplicant returned to the fire and sat down upon the log. For a few moments she sat in silence—waiting—anticipating--hoping that the Goddess to whom she had dedicated her circle would grant her request by opening the portal to the world beyond. For a few moments there was only the sound of the katydids and the occasional hooting of a nearby owl. Finally, the silence was broken by the sound of a woman’s voice. “I am here child. What is it that bears such a burden upon your soul tonight?”

As Rosalie gazed toward the voice, she saw the dark figure of her long deceased ancestor emerge from the shadows. The attractive fortyish-looking woman was dressed in a dark robe; her salt and pepper hair mostly covered by a hood. Although her Great Grandma Boudreaux had been in her eighties when she finally passed from this world, her younger appearance no longer seemed strange to her granddaughter. “Why should I take on the form of an old woman,” she once asked, when I can appear to you as I once looked; mature but still sensually vibrant?”

Not far away, the two onlookers stared at one another incredulously. “Where did that woman come from?” Danny whispered to his friend.

“Sure beats the heck out of me!” Bobby responded; a hint of unease in his whisper. “I don’t b’lieve I’ve ever seen her before. It’s like she came from out of nowhere. She ain’t dressed normal either. Look at her!”

“Danny McLain’s voice dropped down to an unintelligible whisper as he folded his hands together. “Lord Jesus, watch over your servants tonight. Protect us from whatever evil has befallen us here.”

The older woman did not approach the fire but instead, remained close to the shadows, the flicker of the fire reflecting in her eyes.

“I want to cast a love spell Mémére, one that is so powerful that it will bind my love to me forever.”

“Is that what ails you, child?” Her grandmother asked. “You’ve fallen in love for the first time?”

“I’ve never felt anything like this before Mémére, I don’t want to live without him, not for a minute!”

“Oh yes, how I remember young love! It’s a powerful thing. Rosalie, and sooner or later it vexes just about every young lady such as yourself. But you must be careful, for love is often blind.”

“I’d like to learn how to cast the best love spell that I possibly can Mémére, I really want to be with this man, and then keep him.”

The woman laughed sympathetically; there was kindness in her voice when she spoke. “Spells such as those you seek are designed to attract love; not to force anyone against his will.”

“Then no spell is needed child. You have already attracted love.”

“But he’s afraid to give himself to me. He won’t let go.”

“The questions you ask are the same as those asked by every young woman in your situation, but you have an advantage.”


“Of course, Dear! You’re a very attractive young lady Rosalie, and the power flows within you vigorously; even if you are somewhat inexperienced. You already hold the answers to your questions. They lie within you. Listen to your intuition. Listen to your inner-most feelings. They will tell you what to do. Every woman must work at keeping a man just as he must work at keeping her. Every relationship takes work. But your powers are strong Granddaughter, learn how to use them.”

The robed figure threw Rosalie a kiss and then walked slowly into the tree’s impenetrable shadow. The teen cried out, “I love you Mémére!” Then, her Grandma was gone.

Rosalie continued sitting by the fire for several more minutes as she pondered her grandma’s words—reflecting upon the events that had just taken place. Finally, she arose and once again took position in the middle of the circle—facing east, yet skyward—the forest silhouetted in the pale light of the moon.


“Dark Goddess, mistress of the night,

I thank you for joining me in my circle,

and for your blessing on this night.

As we depart upon my opening of this circle,

may we go forth in peace.”

Once again moving to the eastern edge of the circle, she extended her wand downward, and began retracing her earlier steps; this time, moving counter-clockwise around the tree. Finally, she stopped; again facing eastward, and concluded her ceremony. “The circle is open but unbroken. Blessed be.”

By the time Rosalie had concluded her business, the fire’s flickering light had faded; its flames replaced with the orange glow of its dying embers. After repacking her supplies into the tote bag and dousing the coals with water, she made her way home through the shadowy forest with flashlight in hand.

The two intruders remained in position for several minutes, making sure that the girl had gone home and would remain unaware of their presence. Then, emerging from their hiding place, they walked silently toward the clearing. The sudden hooting of an owl halted their progression just short of the now open circle’s perimeter.

“Jeez! The damn thing nearly scared the heck outa me!”

“You’re lettin’ your imagination run away with ya,” Danny retorted dismissively. Still, as he took another step the owl hooted again loudly.

“What did I tell ya? There’s evil all around us here. Let’s get back to the truck before somethin’ happens to us.”

Danny acquiesced. “I s’pose the best thing we can do now is go and talk to the preacher ‘bout all this.”

“Sounds like a good idea to me. He’ll know what to do.”

Well, that's it for this time around. My apologies for any problems with the formatting. Computers can be so hard to please sometimes!

Until next time then, remember to keep it spooky!