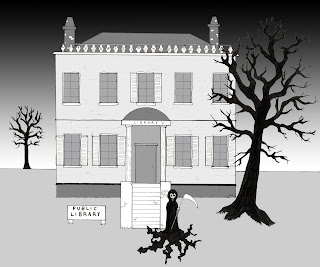 Hello, readers and followers. Welcome to the first Creepy Samples Offering for my new publication, A Day of Reckoning and Other Frightful Tales. This is the first of several offerings you will find here; each one, containing an excerpt from one of the stories contained inside the book.
Today's tale is called "Angel of Death." It concerns a man named Tom Flanagan, who, due to his interest in the paranormal, is allowed to spend an entire night alone in the Boytsville Library, which exists within an old plantation-like house formerly built and owned by a family seemingly cursed with a history of tragic deaths. We pick up the story with Flanagan, having just read the final words of Scarlet Thatcher, the last of the original family members to live in the house, coming to a frightful realization.
An unusually strong gust of wind whistled around the corners of the old building. Tree branches pounded against the windows as if attempting to gain access to the building itself. Emotionally shaken and now fearful, Tom turned his attention once again to the diary's very last page. The author's last words invoked in him a sense of profound sadness as well as personal terror.
"Tonight, I myself witnessed the appearance of the dark being that has plagued my family for so long. The others are gone, and I know now that I will soon fall victim to its inescapable grip of death. I wish for only one thing. May my chronicles survive the passage of time and serve as a warning to anyone who may one day discover them. Beware this harvester of souls, this Angel of Death!
February, 24, 1904”
Tom closed the book and placed it on the shelf. His blood flowed like ice through his veins as he pondered all that had transpired this night. Tonight, I saw the same angel that Scarlet had seen. I'm sure of it. It was not just my imagination, or an optical illusion. I'm sure of it now.
The frightened man could quell neither his thoughts nor his fear. He had seen a ghostly figure—a woman; probably Scarlet. And the books falling to the floor with her diaries opened? Could she have been trying to warn him?
The sound of a woman's mournful cry interrupted his thoughts. The sorrowful voice, although not loud, reverberated throughout the library. A profound understanding took hold even as pure, unbridled terror gripped him to the core of his being. She's crying for me! Scarlet's mourning over me!
Then, he saw it; a dark-robed, hooded figure gazing at him from the other side of the building. Its icy stare boring into his very soul. The figure began moving toward him—slowly, methodically—drawing ever closer with each step; its eyes never breaking contact. Tom lost all composure as the being approached.
“No! No! Get away from me. Please, go away!”
Well, there you have it! For information on where you can find this and my other publications, just go to the the introduction at the top of this front page.
Thanks for reading. Keep it spooky, y'all!
Illustration by K. Kiera.

Posted by Nightwind at 5:12 PM