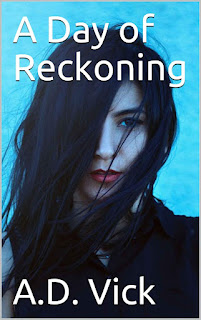 Hello everyone!  It has been two or three weeks since I posted the first in a series of Creepy Samples Offerings for my new book, "A Day of Reckoning and Other Frightful Tales." What I have for you today is a segment from the story for which the publication is named. Because this offering commences at the very beginning of the tale, there is no need for me to describe what has been going on previous to where the story picks up. So, then, let's just start at the beginning.

Jessica arose with a start, and looked around the dark room. At first glance everything seemed normal, but she couldn't shake the feeling of unease that had overtaken her. Something was wrong; yet, she couldn't determine what it might be. As the young woman turned toward the bed, she gasped in horror. Stretched out across the covers was the lifeless body of a young woman. A closer inspection revealed that it was her own body. A trail of blood trickled down from two puncture wounds on her neck.

The horrific memory of all that had just occurred flooded her mind. She remembered turning off the
lamp on the end table, and only moments later, feeling the breath of the cold night air caressing her skin.

"I don't remember opening the window," she had mumbled to herself while arising to shut it.

Jessica recalled the electrifying fear she'd felt when she saw a darkly dressed stranger standing by the gently swaying curtains. She remembered retreating toward the door when he hissed at her threateningly before opening his mouth wide, revealing two obtrusive fangs. She recalled struggling valiantly against the stranger's attack, and vividly recollected the sharp pain in her neck as the man's incisors penetrated her soft skin. She sobbed uncontrollably as she gazed upon the body that was once hers; now lifeless and drained of its essence.

Time stood still as the young woman, filled with grief over her own passing, continued to stare at that
which had once been her earthly vehicle--a body that once experienced pain and pleasure as well as the feel of the cool wind blowing through her hair. She thought about the young man she loved waiting for her back home, and how he had no way no way of yet knowing that she would not be returning to him.

She recoiled with the thought that her best friend, with whom she was staying, would react in the morning upon discovering her dead body. Her thoughts then turned to her friends and family back home, and the good times they'd all had together. Jessica grieved for the fleeting life she once had.
Seemingly frozen in time, she struggled to make peace with that which had happened.

When Jessica could no longer bear the sight before her, she stooped over in an effort to touch her former earthly vehicle. Then, she turned and walked out the door, without even attempting to open it.

Upon her arrival in New Orleans, she'd heard stories about resident blood drinkers, but had dismissedthem as superstitious fantasy and failed to pay them any mind. Now she believed; and, as she strode out into the darkness of the night, she promised herself that she would make the creature pay for what he'd done.

"Vampire or not," she told herself, "he'll pay a high price for what he's done to me."

Well, there you have it. We now have a ghost seeking vengeance upon the physical being responsible for her untimely death. Does she accomplish her mission, and if so, how? To find the answer you'll have to follow the links here either to Romance and Horror Dot Com, to the Lulu Bookstore, or you can find this particular story available independently on Kindle.
Until next time then, keep it spooky and thanks for being here!
Posted by Nightwind at 2:01 PM